skip to main | skip to sidebar

I'd like to come up with some thing witty and hilarious to tell you, but I've got nothing, other than the fact that I'm hopelessly addicted to a show about Polygamists. If you watch Big Love, then we have something to discuss.

I've managed to knit about 3 inches of lace on my FLS. I would be farther along than that, but I've got to work in order to buy more yarn. Darn that money thing! I took some pictures of my progress, but right now, my computer and my phone aren't talking, so I've nothing good to show.

I think I'm going to change my strategy on life. Unless Cabana Boy can put a roof over my head, do all of the house work, and buy me all the yarn I want, I'm steppin'!

P.S. All the single ladies!
Posted by MsKnottyKnits at 5:37 PM 3 comments:

This week was just one big crazy suck fest. From the Boss Man being in town, to having to stay the night at a friends because they are changing out the sprinkler heads it just sucked.

By the way, for those of you who live in Cumberland County, NC, be advised that the Fire Marshall is a twit. Apparently, the sprinkler heads in my condo had reached the end of their shelf life and needed to be replaced. Fair enough. Well! Any time you drain a sprinkler system, you are in violation of the county ordinance that states multi-family units must have a functioning sprinkler system in order for the units to be considered "habitable". Therefore and thusly, myself, mini-me, Two-Fingers and Chewi all had to evacuate the condo before 5:45 in the morning and could not return until 6pm. I could go on about what a pain it was, or how crazy Two Fingers got, or how little sleep I got, but I'm quite sure you can expound on your own here. For now, let's just keep it simple and call it Psychosis.

My needles finally came in so that I could start my FLS! I ended up changing my game plan and knitting a large on 7s, because the fabric knit with the 8s was icky. The 7s give me about 1-2 extra stitches per inch, and so I am just going to go with the large instead of the medium. Mind you, knitting with the 8s got me dead on gauge, but if you don't like something, you don't like something, right? 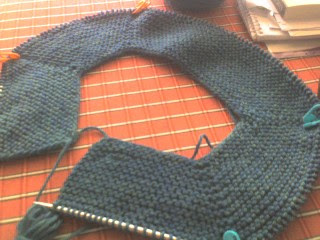 I will say, that I had started this morning, with a 7s and the Medium. When I tried the yoke on, just before the second button hole, the neck seemed really small. Most FLS pictured on Ravelry have a neckline that is halfway between your neck and the edge of your shoulder. Mine was at the base of my neck. Granted, once washed the yarn may grow - but the yarn would have needed to "grow" almost a full inch to an inch and a half. That's a whole lot to ask from yarn, and quite frankly, I've been sickly, and not in the mood to mess around with crap, and so I just said to hell with it, and started over with a Large.

I'm in love with my sweater. How festive.

I hope you all have a lovely Valentine's Day. I'll be spending it with a few of my closest friends and enjoying every minute of their company.
Posted by MsKnottyKnits at 4:40 PM 5 comments:

Let the Sun Shine In!! 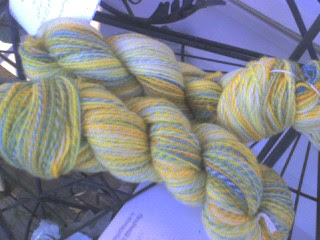 Isn't it warm and sunshiney? It made my day to come home to this in the mailbox! This is 600 yards of SW Merino fingering/sock weight spun up by my good friend Lori. Check out her Etsy shop! She's got handspun and roving up for grabs! 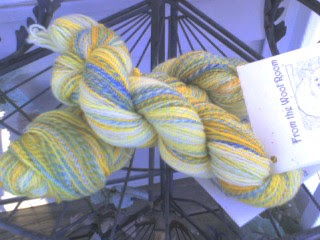 She also included some goodies which made my day! Thank you so very much for being you, Lori! This yarn is screaming knee-highs to me. I have loved Lakeside since I have seen them, but I'm a bit worried that my yarn may be too busy and the beautiful pattern might get lost. What do you think?

P.S. I am quite intrigued with the Bintje-Socks. I think my colors would work better.

My needles for the FLS are winging their way to me as we speak, so the socks will wait! I can't wait to start my sweater!!
Posted by MsKnottyKnits at 7:02 PM 6 comments:

And here you thought I was just buying the goodies, eh?

I made this for my friend, Tipsy. It was her birthday over the weekend, and I had to make her something special. She's been wanting a hat, but she got a headband. 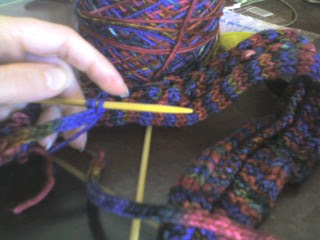 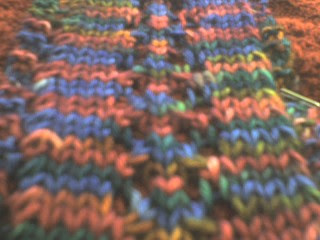 This is "Molly's Headband" (Ravel It!) and was originally published in an Interweave Knits collection called "Sweet Somethings". It was a really quick and easy knit. (Read: good stash buster that qualifies for last minute knit status.)

Mean while, back at the ranch...

Mini-Me and I visited Hollow Oak Farms this weekend and had a great time with our friend and fellow wool lover, Meg. It was a fun day - carding, picking, and playing with color. I really enjoy working with Meg. She's been working with fiber for years and is a wealth of knowledge and inspiration. I think the fact that Sheep and Angora bunnies are in her back yard helped a bit too! We pet the sheep, turkey, bunnies and fed the chickens. Murphy (the doggie) was very sweet and enjoyed Mini-Me. The baby bunnies were too sweet! We brought them into the house for a bit of socialization.

It was hard not to take one home. Really hard. 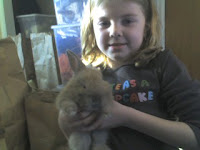 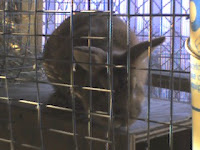 Here is Mini-Me with one. I love their noses. I wanted to bring one home. 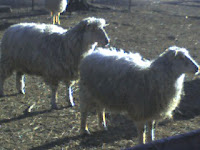 Meg has sheep! Although I didn't take pictures of them, she did have sheep we fed by hand and got to pet! The process of turning their fleece into yarn still amazes me. Meg is set up to completely process a fleece, although she does not shear them herself. It is truly a labor of love! I enjoyed learning about it - my brain weight has increased exponentially. (Which, you know, is an amazing thing as it is so large already. *ahem*)


The fabulous Opal and I are getting ready to take our voyage into the land of the February Lady Sweater, as previously stated. We should be started within the week. I suppose I should buy needles for it. That might help. I'm scared, folks. I'll just be honest. If it were not for my friends, I'd be to freaked out to knit it.

By the way, this is Murphy the Mastiff. He says hello. 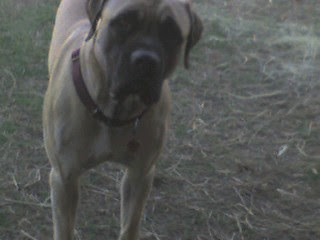 Posted by MsKnottyKnits at 5:14 PM 6 comments:

Blogs and Websites I Can't Get Enough Of!

A proud member of Team Plurk!